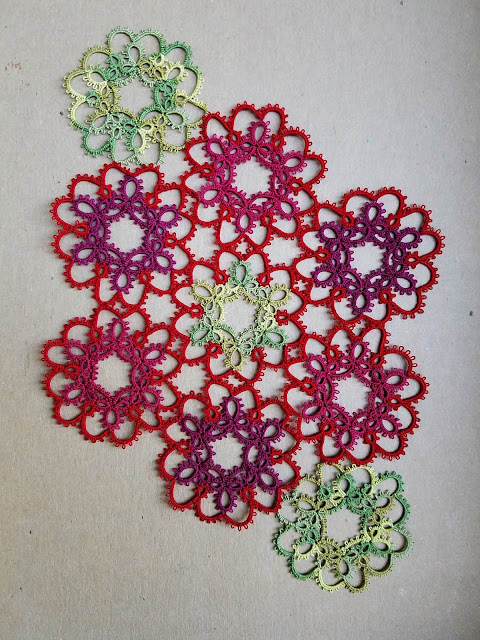 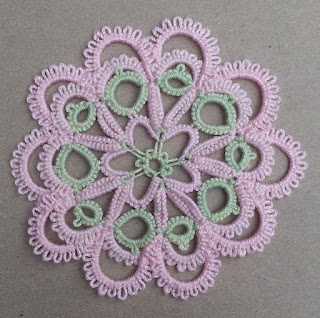 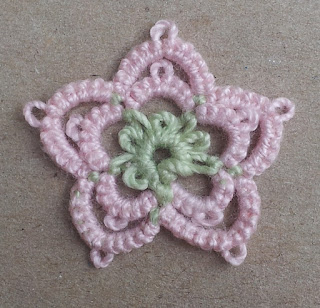 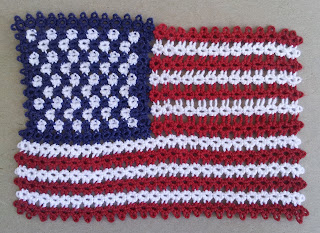 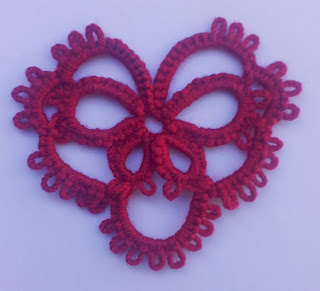 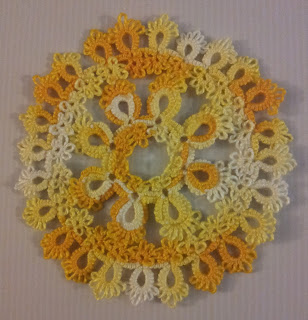 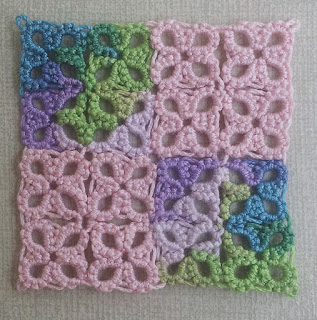 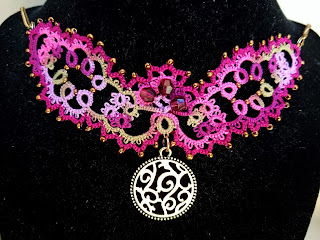 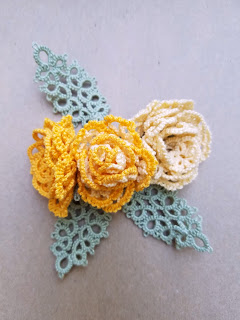 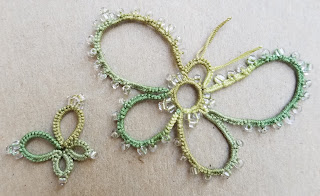 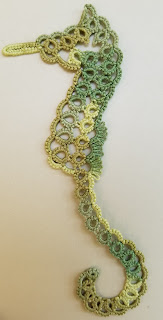 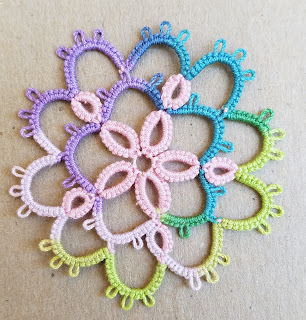 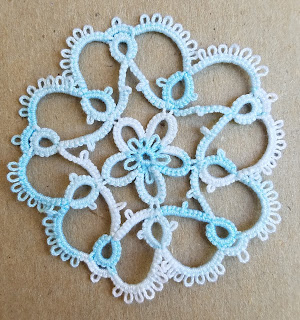 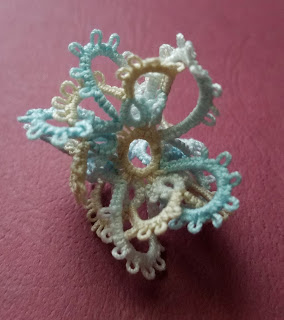 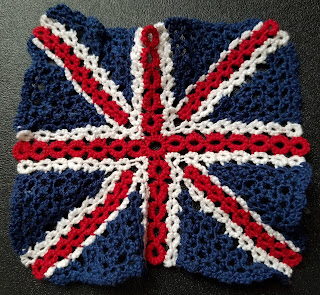 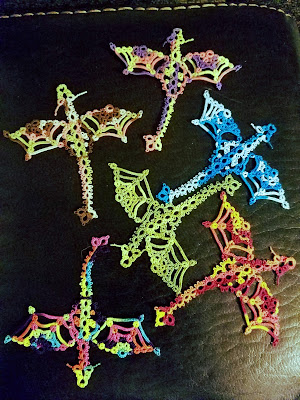 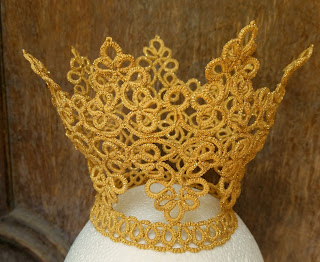 I hope you all have a wonderful new year!
from Erisnyx At 6:25 PM 1 comment:
Email ThisBlogThis!Share to TwitterShare to FacebookShare to Pinterest
Labels: Tatting (uncategorized)

November and December tatting from 2015

Well, I haven't posted in a while, so here is a bunch of the tatting I've done.

This Sweet Heart Tatted Bookmark by Kersti was made for my sister's birthday back in November.

I made Jane Eborall's Badger Bookmark for my cousin's birthday, which was also in November. I really liked how this came out. The beads were a bit of a challenge, but I think they turned out looking nice.

This butterfly is Figure 214 in The Complete Book of Tatting by Rebecca Jones. I made it for my mother's birthday at the beginning of December.

And now, here are the pieces I made as gifts for Christmas. Due to some scheduling errors on my part, I postponed making any of these until the start of December. I don't recommend waiting that long to start such a project, and will hopefully be better this year at making these throughout the year.

First, a Cloverleaf Snowflake from Tatted Snowflakes, by Vida Sunderman. I forgot to take a picture of it until just before I gave it to my friend, hence the green background.

For my oldest sister and her family, I made Figure 260 from The Complete Book of Tatting by Rebecca Jones.

I really liked how this Elegant Snowflake from Tatted Snowflakes by Vida Sunderman turned out.

Then I made Figure 262, from The Complete Book of Tatting by Rebecca Jones.

I loved this Crystal Petal Snowflake, from Tatted Snowflakes by Vida Sunderman. My friend loved it too.

Here's a Whirlaway Snowflake, from Tatted Snowflakes by Vida Sunderman. 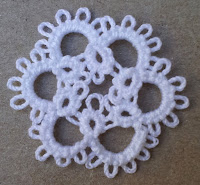 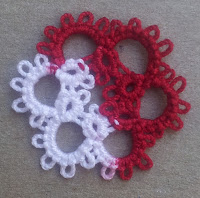 I made two Dainty Snowflakes from Tatted Snowflakes by Vida Sunderman. They were done in Lizbeth size 20, #601 and #151.

This Tiny Snowflake, from Tatted Snowflakes by Vida Sunderman, turned out really cute.

I liked this Sparkling Snowflake, from Tatted Snowflakes by Vida Sunderman.

Then I made a Poinsettia, from Christmas Angels and Other Tatting Patterns by Monica Hahn. This is probably one of my favorite pieces I tatted in December.

A Minaret Snowflake from Tatted Snowflakes by Vida Sunderman.

A Spoke Snowflake from Tatted Snowflakes by Vida Sunderman. I actually made two of these, but the pictures I took of the other one (done in Lizbeth # 152 Christmas Green Mix) didn't turn out very well at all.

A Ruffled-Star Snowflake, from Tatted Snowflakes by Vida Sunderman. I think next time I do this pattern, I'll use less red thread.

Here is Figure 258, from The Complete Book of Tatting by Rebecca Jones. I like this pattern, and it reminds me a lot of the Brain Cell pattern by Martha Ess that I made back in June 2014.

This Holly is Figure 273, from The Complete Book of Tatting by Rebecca Jones. This is another of my favorites from this season of tatting. This is also the final motif of my second 25 Motif Challenge.

A Trefoil Snowflake, from Tatted Snowflakes by Vida Sunderman. This is another pattern that I made two of, and that the picture for the other one (done in Lizbeth #151 Angels Love) didn't turn out well enough to be posted here.

I try to only post pictures if they display the featured tatting well enough that people can see the proper colors and easily see the fine details of the pattern that was used. I don't always succeed in taking the best picture, but most of the time there is at least one that is good enough to post.
Anyway, I hope that the pictures I post are acceptable to all of you.

Here is a Pinwheel Snowflake, from Tatted Snowflakes by Vida Sunderman.

This final piece is one I made after doing the Holly Figure 273. I fiddled around with the leaves of that pattern, and then connected them to a central motif made of rings. Then I filled in the empty space with rings and chains made of Josephine Knots. I dubbed it the Hollyleaf Motif when naming the picture, but didn't actually write down the pattern while making it.

I hope that you all have a wonderful new year of tatting, or whatever craft or hobby it is that you love to do!
from Erisnyx At 1:29 PM 2 comments:
Email ThisBlogThis!Share to TwitterShare to FacebookShare to Pinterest
Labels: 25 Motif Challenge, Tatting (uncategorized)

Well, I have a backlog of photos that I've been meaning to post. I hope that you enjoy them.

This puppy is from Inga Madsen's Tatted Animals. I gave this to my cousin for his birthday, and based the colors off of our puppy, who loves my cousin very much.

This is Kersti's Tatted Bookmark pattern. I made it for my uncle's birthday. He is a Denver Broncos fan, so I thought I would try and make the pattern look like their colors. I really like how it turned out. The pattern itself was easy to follow, and allowed me to switch colors without much fuss.
Now, you may be wondering why it doesn't have a tassel.
The answer? I don't really care for tassels, either for making them or for using bookmarks that have them.

I made Aislyn's bookmark, by Carrie Neahring for my great aunt's birthday. She loved it! I really enjoyed making it. The pattern was easy to follow, and the design is lovely. I did lengthen it a little, but that's just because I prefer long bookmarks.

Another friend of mine had a baby, so I tatted her little girl's name. I'm not sure how many times I can gush about these patterns (from The Tatter's Paradise) until I start boring people, but they are my go to for tatting letters

When I was looking for a motif to put on some letters, this design was just what I wanted. It is Star No. 4 from Tatting Patterns and Designs by Gun Blomqvist and Elwy Persson. When I first saw it in the book, I thought it would look pretty cool if done in three colors.

I said sure, and so had a Fandango bookmark making spree. I actually made seven bookmarks, but two of them were chewed up by our new puppy (the same puppy I mentioned earlier, in fact). This is a fun pattern though, and my cousin was happy when I gave them to her.

I made some Beaded Butterflies from Tatting Patterns by Lyn Morton for some other letters was mailing. I think that motifs are a wonderful addition to almost any letter. They're easy to make, and add an extra personal touch.
Now, you may have noticed that I have a tendency to omit beads from patterns that call for them. It's not that I don't like beads, I usually just don't think about finding the right beads for the project until after I've already tatted it.
What do you think about using beads in tatting?

This is Tatslife's Two Round Bookmark. I made it for my brother-in-law's birthday. This is another of those patterns that I've held onto for a while without tatting, so I'm happy to have finally tatted it. The pattern was fun, and I really like how the rings at the top of the bookmark turned out.

This is Carolyn Groves's Simple Straight Bookmark. I made it for my aunt's birthday. This pattern is really cute. I like how the chains weave around the rings.

This is Ruth Perry's Snowflake 2008. I made it for my aunt as a thank you for her giving me a few skeins of Lizbeth thread, one of which was the color I used for this snowflake. Now, I didn't realize until after I was looking at this picture, but I completely omitted a ring and chain off of each point. I feel silly about not catching that mistake, but I do think the snowflake still looks nice.
And at least I was consistent and made that mistake on each point!
Anyway, I loved the Celtic twist in this pattern. It was really fun to make, and my aunt loved it.

This is the Coaster or Centre for Main Pattern from Tatting Patterns by Lyn Morton. I used some excess thread from other projects for this. It was a fun break from making bookmarks.

This is Penolopy Bulnick's Tatted Pumpkin Earrings pattern. Now, the pattern was actually written for needle tatting. It was interesting to see how needle tatting patterns are written slightly differently than shuttle tatting patterns. I made some pumpkins on their own, and then I decided to make a pair into earrings for myself.
I think they turned out really cute.

Now this beast is something that I've been working on for about a year.
A knitted blanket.
My sister taught me how to knit. I like knitting. It is kind of relaxing. I don't know a lot about knitting yet, but my sister said that I used a stockinette stitch and a reverse stockinette stitch.
I just thought it would be cool to make squares.
I used size 8 circular needles.
from Erisnyx At 4:25 PM 4 comments:
Email ThisBlogThis!Share to TwitterShare to FacebookShare to Pinterest
Labels: 25 Motif Challenge, Knitting, Tatting (uncategorized)
Older Posts Home
Subscribe to: Posts (Atom)